by Jan Barger, RN, MA, IBCLC, FILCA. Reprinted with permission from the author. 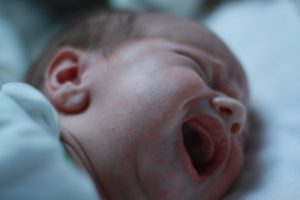 You’ve made it through your first 24 hours as a new mom.  Maybe you have other children, but you are a new mom all over again… and now it’s your baby’s second night.

All of a sudden, your little one discovers that he’s no longer back in the warmth and comfort – though a bit crowded – womb where he has spent the last 9 months – and it is SCARY out here!  He isn’t hearing your familiar heartbeat, the swooshing of the placental arteries, the soothing sound of your lungs or the comforting gurgling of your intestines.  Instead, he’s in a crib, swaddled, in a diaper, a tee-shirt, a hat and a blanket.  All sorts of people have been handling him, and he’s not yet become accustomed to the new noises, lights, sounds and smells.  He has found one thing though, and that’s his voice… and you find that each time you take him off the breast where he comfortably drifted off to sleep, and put him in the bassinet – he protests, loudly!

In fact, each time you put him back on the breast he nurses for a little bit and then goes to sleep.  As you take him off and put him back to bed – he cries again… and starts rooting around, looking for you.  This goes on – seemingly for hours.  A lot of moms are convinced it is because their milk isn’t “in” yet, and the baby is starving.  However, it isn’t that, but the baby’s sudden awakening to the fact that the most comforting and comfortable place for him to be is at the breast.  It’s the closest to “home” he can get.  It seems that this is pretty universal among babies – lactation consultants all over the world have noticed the same thing.

So, what do you do?  When he drifts off to sleep at the breast after a good feed, break the suction and take your nipple gently out of his mouth.  Don’t move him except to gently slide him into an upright neutral position with his head to the side.  Don’t try and burp him – just snuggle with him until he falls into a deep sleep where he won’t be disturbed by being moved.  Babies go into a light sleep state (REM) first, and then cycle in and out of REM and deep sleep about every ½ hour or so. If he starts to root and act as though he wants to go back to breast, that’s fine… this is his way of settling and comforting.   During deep sleep, the baby’s breathing is very quiet and regular, and there is no movement beneath his eyelids.

Another helpful hint… his hands were his best friends in utero… he could suck on his thumb or his fingers anytime he was the slightest bit disturbed or uncomfortable.  And all of a sudden he’s had them taken away from him and someone has put mittens on him!  He has no way of soothing himself with those mittens on.  Babies need to touch – to feel – and even his touch on your breast will increase your oxytocin levels which will help boost your milk supply!  So take the mittens off and loosen his blanket so he can get to his hands.  He might scratch himself, but it will heal very rapidly – after all, he had fingernails when he was inside you, and no one put mittens on him then!

By the way – this might happen every once in a while at home too, particularly if you’ve changed his environment such as going to the doctor’s, to church, to the mall, or to the grandparents!  Don’t let it throw you – sometimes babies just need some extra snuggling at the breast, because for the baby, the breast is “home.”

No portion of this text may be copied or reproduced in any manner, electronically or otherwise, without the express written permission of the author (IBCLC@aol.com). 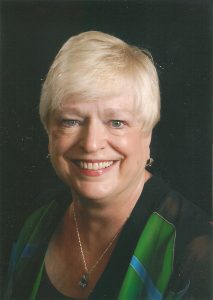 Jan Barger is a mom of three, and proud Grammie of three and one due in 2017. She has been in private practice as a lactation consultant, worked for many years for a pediatric practice in the Chicago ‘burbs as their lactation consultant, has a background in all aspects of maternal-child health nursing, and currently teaches with Lactation Education Consultants – an organization that provides education for those aspiring to become IBCLCs. Jan is a past president of ILCA, was on the IBLCE board and exam committee, and is a co-author of Clinical Experience in Lactation: A Blueprint for Internship, and Clinical Instruction in Lactation: Teaching the Next Generation. She lives in Wheaton IL with husband Bob and loves to travel and read.