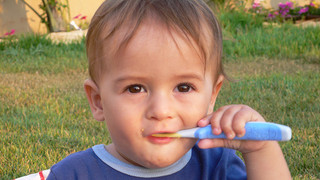 It’s often said that breastfeeding (particularly while lying down at night) will cause tooth decay, just like letting a baby sleep with a bottle of milk can cause “baby bottle mouth.” Essentially, a valid link has not been made between breastfeeding (nighttime or otherwise) and cavities. However, breastfed babies can certainly get cavities, so good dental hygiene is important.

Before the use of the baby bottle, dental decay in baby teeth was rare. Two dentists, Dr. Brian Palmer and Dr. Harold Torney, have done extensive research on human skulls (from 500-1000 years ago) in their study of tooth decay in children. Of course these children were breastfed, probably for an extended length of time. Their research has led them to conclude that breastfeeding does not cause tooth decay.

A bacteria (present in plaque) called Streptococcus mutans (S. mutans, or strep mutans) is thought to be the primary cause of tooth decay. These bacteria use food sugars to produce acid – this acid directly causes the decay. Strep mutans thrives in a combination of sugars, low amounts of saliva and a low ph-level in the saliva. A portion of the population (around 20%) is thought to have increased levels of this high acid producing bacteria, putting them at higher risk for developing dental decay. After your baby gets teeth, he can get this bacteria through saliva to saliva contact from mother (or other caregiver) to baby. To help prevent transfer of this bacteria to baby, avoid any saliva to saliva contact such as sharing spoons & cups, wet kisses on the mouth, chewing food for baby, or putting baby’s pacifier in your mouth. On the other hand, one study indicates that children of moms with high levels of strep mutans may actually have some protection (immunization) from decay through frequent saliva to saliva contact in the months before baby’s teeth erupt.

Per Brian Palmer, “Human milk alone does not cause dental caries. Infants exclusively breastfed are not immune to decay due to other factors that impact the infant’s risk for tooth decay. Decay causing bacteria (streptococcus mutans) is transmitted to the infant by way of parents, caregivers, and others” (Palmer 2002).

Until relatively recently, the only studies that had been done were on the effects of lactose (milk sugar, which breastmilk does contain) on teeth, not the effects of complete breastmilk with all its components. Breastmilk also contains lactoferrin, a component in breastmilk that actually kills strep mutans (the bacteria that causes tooth decay). A study in the March/April 1999 issue of Pediatric Dentistry utilized extracted teeth to obtain most of its results and studied children only for determining the pH changes in dental plaque (Erickson 1999) – this study  “concluded that human breast milk is not cariogenic.” A Finnish study could not find any correlation between caries and breastfeeding among children who were breastfed longer (up to 34 months) (Alaluusua 1990). Valaitis et al concluded, “In a systematic review of the research on early childhood caries, methodology, variables, definitions, and risk factors have not been consistently evaluated. There is not a constant or strong relationship between breastfeeding and the development of dental caries. There is no right time to stop breastfeeding, and mothers should be encouraged to breastfeed as long as they wish.” (Valaitis 2000). Another review in 2013 (Lavigne 2013), “revealed that there was no conclusive evidence that prolonged breastfeeding increased the risk of early childhood cavities.”

In an unpublished master’s thesis by Dr. Torney (Torney, 1992), no correlation was found between early onset (< 2 yrs) dental caries and breastfeeding patterns such as frequent night feeds, feeding to sleep, etc. He is convinced that under normal circumstances, the antibodies in breastmilk counteract the bacteria in the mouth that cause decay. However, if there are small defects in the enamel, the teeth become more vulnerable and the protective effect of breastmilk is not enough to counteract the combined effect of the bacteria and the sugars in the milk. Enamel defects occur when the first teeth are forming in utero. His explanation is based on quite a large study of long-term breastfed children with and without caries.

According to this research, a baby who is exclusively breastfed (no supplemental bottles, juice, or solids) will not have decay unless he is genetically predisposed, i.e.. soft or no enamel. In a baby who does have a genetic problem, weaning will not slow down the rate of decay and may speed it up due to lack of lactoferrin.

Much research indicates that it’s the other foods in baby’s diet (rather than breastmilk) that tend to be the main problem when it comes to tooth decay. The 1999 Erickson study (in which healthy teeth were immersed in different solutions) indicated that breastmilk alone was practically identical to water and did not cause tooth decay – another experiment even indicated that the teeth became stronger when immersed in breastmilk. However, when a small amount of sugar was added to the breastmilk, the mixture was worse than a sugar solution when it came to causing tooth decay. This study emphasizes the importance of tooth brushing and good dental hygiene.

Big Bad Cavities: Breastfeeding Is Not the Cause by Lisa Reagan, from Mothering Issue 113, July/August 2002

Infant Dental Decay – Is it related to Breastfeeding? by Brian Palmer, DDS These are the notes for one of Dr. Palmer’s slide presentations.

Breastfeeding and Infant Caries: No Connection by Brian Palmer, DDS Published in: ABM NEWS and VIEWS, The Newsletter of The Academy of Breastfeeding Medicine, 2000, Vol. 6, No. 4 (Dec), p27 & 3

Palmer B. The Influence of Breastfeeding on the Development of the Oral Cavity: A Commentary. J Hum Lact 1998;14:93-98.

Aaltonen AS and Tenovuo J. Association between mother-infant salivary contacts and caries resistance in children: a cohort study. Ped Dentistry 1994; 16(2):110-16.