Per the US Centers for Disease Control, Lyme disease is caused by the bacterium Borrelia burgdorferi, and is transmitted to humans via the bite of a tick infected with this bacteria. The Lyme disease bacteria has not been cultured from human milk (though associated DNA have been detected – see below), and no babies have developed Lyme disease from their mothers’ milk.

Here is what we know:

If a mother does become infected with Lyme disease, she will likely not know about it until symptoms appear (7-14 days or longer), and baby will have already been exposed to the illness at that point (IF it can be transmitted via breastmilk – we don’t know whether this is possible). Breastfeeding builds baby’s immune system and will also provide baby with extra antibodies to Lyme disease. Discontinuing breastfeeding would deprive baby of the extra immune protection from breastfeeding. 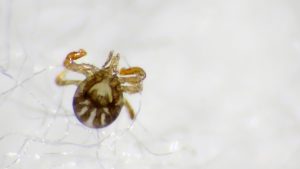 The general consensus is that breastfeeding should continue if a mother has Lyme disease, if she has already started or completed treatment. There are several medications that can be used to treat Lyme disease in breastfeeding mothers.

Lawrence & Lawrence (in Breastfeeding: A Guide for the Medical Profession, 2016) suggest that since we don’t have concrete evidence on the possibility of transmission, this should be discussed with the mother and (depending on the mother’s wishes) breastfeeding could be withheld until the mother’s treatment has been started or completed. They recommend observing baby for symptoms of Lyme disease whether or not the mother discontinues breastfeeding temporarily, and treating baby if symptoms appear.

“The generally accepted (included in position statements by the Academy of Pediatrics, the College of Rheumatology and the Infectious Disease Society of America) and evidence-based information for these topics is as follows…. During or After Treatment of Lyme Disease, Is It Safe to Breast-feed? It is safe to breast-feed while being treated for Lyme disease. B. burgdorferi has never been cultured from human breast milk, and there is no case of an infant developing symptomatic or asymptomatic B. burgdorferi infection from breast milk.”

Routes of Transmission: Humans acquire B. burgdorferi infection from infected ticks at the time the tick takes a blood meal; Lyme disease is not spread by person-to-person contact or by direct contact with infected animals. Transplacental transmission of B. burgdorferi has been reported, but the effects of such transmission on the fetus remain unclear. The results of two epidemiologic studies document that congenital Lyme disease must be rare, if it occurs at all. Transmission in breast milk has not been described. B. burgdorferi can be cultured from the blood in some patients with early acute infection, and it is able to survive for several weeks in stored blood. However, at least one study has found that the risk for transfusion-acquired infection is minimal.