Most breastfeeding mothers can drink caffeine in moderation. Some babies, particularly those under 6 months, may be more sensitive to mom’s caffeine intake. Babies whose mothers avoided caffeine completely during pregnancy seem to react more to caffeine in mom’s diet. Even if baby is sensitive to the caffeine now, he may not be when he’s a little older — so if you do have to stop or limit your caffeine intake, you can try again when baby is older.

Per Medications and Mother’s Milk (Hale 2017, p. 139-140) caffeine is in Lactation Risk Category L2 (safer); milk levels are quite low (0.06-1.5% of maternal dose) and usually peak 1-2 hours after ingestion. One study has indicated that chronic coffee drinking might decrease iron content of breastmilk (Nehlig & Debry, 1994). The American Academy of Pediatrics has classified caffeine as a “Maternal Medication Usually Compatible with Breastfeeding.” Caffeine is given directly to premature babies (as a treatment for breathing problems) in much higher levels than than those generally found in the breastmilk of mothers who consume caffeine.

If your baby is sensitive to caffeine, it will typically become less of an issue as baby gets older. Newborns have a much harder time metabolizing caffeine than older infants. Preterm or ill infants might also have more problems with mom’s caffeine intake.

Is baby sensitive to my caffeine intake?

According to Breastfeeding Answers Made Simple (Hale Publishing 2010, p. 521), excessive caffeine consumption by the mother (more than 750 mg per day) can result in a baby who shows signs of caffeine stimulation. “If a mother consumes daily 750 mg of caffeine or more – the amount of caffeine in five 5-oz cups of coffee – and her baby seems irritable, fussy, and doesn’t sleep long” she can try substituting caffeine-free beverages for a week or two.

If your baby seems particularly wakeful or fussy and there is a significant amount of caffeine in your diet, you might want to cut back or stop the caffeine for 2-3 weeks to see if it makes a difference. If you cut out caffeine, consider decreasing it slowly since abruptly stopping caffeine can result in headaches or other symptoms.

If caffeine stimulation is a problem for baby, it may take a few days to a week after mom eliminates caffeine for baby to become less fussy. 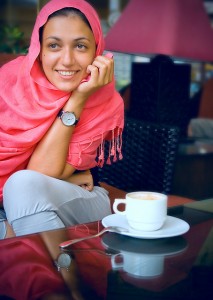 There is no evidence that caffeine decreases milk supply.

The myth that caffeine will decrease milk supply is widespread. Many moms consume caffeine, and it ought to be easy to document any adverse effects of caffeine on milk supply. No such effect has been observed, however, despite a number of studies of caffeine intake in breastfeeding mothers and years of clinical observations. In fact, one study (Nehlig & Debry, 1994) indicates that caffeine can stimulate milk production. A baby who is fussy and jittery from caffeine stimulation may not nurse well, however, which could lead to a decreased milk supply over time (due to decreased nursing, rather than the mother’s caffeine intake).

How much caffeine is too much?

Watching your baby is the only way to get an individual answer to this question. As stated above, the amount of caffeine that might affect baby will vary widely depending upon the specific baby and the baby’s age and health. The estimate we often hear is “less than five 5-oz cups of coffee” or 500 mg/day. Various sources suggest an upper limit for caffeine intake ranging from 300-750 mg/day.

During pregnancy: Most sources suggest a 300 mg/day upper limit on caffeine for pregnant moms. However, one source (Motherisk) recommends an upper of limit 150 mg caffeine per day during pregnancy.

The table below shows various suggested upper limits for caffeine in terms of amounts of coffee, tea, soda, etc. It should be noted that energy drinks generally have added vitamins as well, and vitamin toxicity could also be an issue especially when combined with other supplements.

Nehlig A, Debry G. Consequences on the newborn of chronic maternal consumption of coffee during gestation and lactation: a review. J Am Coll Nutr. 1994 Feb;13(1):6-21. “We conclude in this review that maternal caffeine consumption in moderate amounts during gestation and lactation has no measurable consequences on the fetus and newborn infant. Pregnant mothers, however, should be advised to consume coffee and caffeinated beverages in moderation [300 mg caffeine/day], especially because of the prolonged half-life of caffeine both during the last trimester of pregnancy and in the newborn infant.”

Ryu JE. Effect of maternal caffeine consumption on heart rate and sleep time of breast-fed infants. Dev Pharmacol Ther. 1985;8(6):355-63. This small study showed no significant changes in breastfed baby’s heart rates and sleep time when the mothers ingested 500 mg/day of caffeine. This is the “5 cups of coffee” study.