Nipple blanching (turning white) after a feeding occurs when the blood flow to the nipple is limited or cut off. Blanching is most often related to latch problems. Nipple blanching is often, but not always, associated with pain. Because women may describe shooting, burning breast/nipple pain, this can be mistakenly diagnosed as thrush. If the normal color returns after your baby has finished a feeding and there is no pain, then the blanching is not a problem.

Blanching due to compression

The most common reason for nipple blanching is that that baby is compressing the nipple while nursing. This can be due to:

When blanching is due to baby’s compression of the nipple, the nipple is white and often misformed (flattened, creased, pointed, etc.) immediately upon coming out of baby’s mouth. There may be a white stripe across the nipple directly after nursing. Pain may not start until a few seconds to a few minutes after nursing, as the circulation returns to the nipple. If you are experiencing pain with the blanching, then finding and remedying the underlying cause will also eliminate the blanching.

Blanching due to vasospasm

Vasospasm, which is more severe, is a sudden constriction/narrowing of a blood vessel (in the nipple, in this case) that is extremely painful. It might occur a short time after nursing or in between nursings. Vasospasm can have various causes:

Vasospasm can be a secondary response to pain or nipple trauma (damaged nipples or thrush). In this case, the nipple(s) turns white shortly after nursing (rather than coming out of baby’s mouth white and misformed). Mom might notice a white circle on the face of the nipple a few seconds to a few minutes after breastfeeding. Cold often triggers the vasospasm and/or makes it worse. Unlike blanching due to compression, latch and positioning may be fine if the source of any nipple damage has already been fixed. Healing the nipple trauma or other source of pain should eliminate the vasospasms, although they may persist for a short time after the nipple has healed (previously damaged tissue can remain sensitive for a time).

Raynaud’s of the nipple 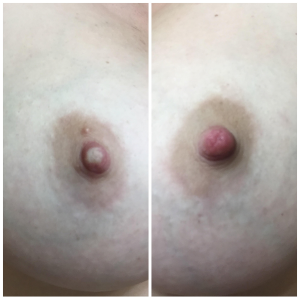 White and red phases of vasospasm from Raynauld’s. Image used with permission.

Vasospasm can also be caused by Raynaud’s Phenomenon (more info here), which causes sudden vasospasms in the extremities. When nipple vasospasm is caused by Raynaud’s Phenomenon (Raynaud’s of the nipple), the nipple turns white, then there is usually a noticeable triphasic color change – from white to blue to red – as blood flow returns. The color change may also be biphasic – from white to blue.

Vasospasm due to Raynaud’s is more likely to occur on both sides (rather than just one nipple), lasts for relatively long periods of time (rather than for a few seconds or a few minutes), and can occur during pregnancy and/or at times unrelated to feeding. Vasospasms may also occur in fingers or toes. Cold typically triggers the vasospasm and/or makes it worse. Nipple trauma (and other causes of compression blanching or vasospasm) can exacerbate the problem. Raynaud’s phenomenon may recur with subsequent pregnancies/breastfeeding, so be prepared to seek treatment quickly if you have experienced this in the past.

Per Anderson et al, “Because the breast pain associated with Raynaud’s phenomenon is so severe and throbbing, it is often mistaken for Candida albicans [yeast] infection. It is not unusual for mothers who have Raynaud’s phenomenon of the nipple to be treated inappropriately and often repeatedly for C albicans infections with topical or systemic antifungal agents.”

Some maternal medications have been associated with vasospasm, including oral contraceptives containing estrogen. Fibromyalgia, rheumatologic diseases (eg, systemic lupus erythematosus or rheumatoid arthritis), endocrine diseases (eg, hypothyroidism or carcinoid), and prior breast surgery have also been associated with Raynaud’s phenomenon. Some sources indicate that the antifungal medication fluconazole may be associated with vasospasm, although the manufacturer does not report this as a known complication of fluconazole use. Other sources feel that vasospasms experienced by mothers taking fluconazole are a result of nipple pain/trauma due to thrush (and not due to the medication used to treat the thrush).

See links below for additional details.