Normally the changing fat content of milk doesn’t require any thought at all. This is an explanation of how it works, and why it is recommended to allow your baby to finish the first breast before offering the second (instead of switching sides while baby is actively breastfeeding). 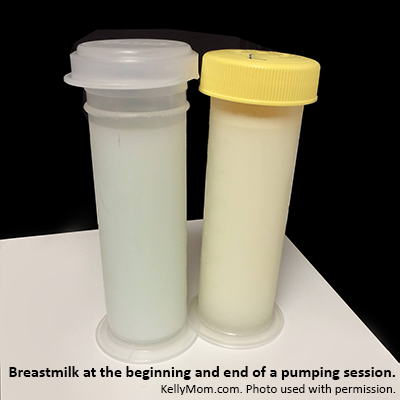 The breast only makes one type of milk (which has a relatively high fat content). Because of the mechanics of milk release, the amount of fat in the milk available to baby gradually changes as a feed progresses. As milk is produced in the breast, the fat globules in the milk tend to stick to each other and to the walls of the alveoli (where the milk is made). Between feedings, milk collects in the breasts and gradually moves out toward the nipple, leaving more and more of the fat “stuck” further back in the milk ducts. The more time between milk removal (feeding or expression), the lower the fat content of the milk available to baby at the beginning of the feeding.

Foremilk and hindmilk are not different types of milk–they are only terms that refer to whether we’re looking at milk at the start or end of a feeding. The term foremilk refers to the milk at the beginning of a feeding; hindmilk refers to milk at the end of a feeding, which has a higher fat content than the milk at the beginning of that particular feeding. There is no sharp distinction between foremilk and hindmilk–the change is very gradual. Research from Peter Hartmann’s group tells us that fat content of the milk is primarily determined by the emptiness of the breast — the less milk in the breast, the higher the fat content.

Once the let-down (or Milk Ejection Reflex/MER) is triggered (by baby’s nursing, pumping, etc.), the milk is squeezed down the ducts until it becomes accessible to the baby. Milk production is not faster during letdown – the flow is simply faster. There are several let-downs per feed, although most mothers only sense the first one.

As the breast starts to empty, the fat globules begin to dislodge and move down the ducts (let-down facilitates this process). So the further into the feed, the higher the fat content of the milk, as more and more fat globules are forced out. The end result is that the milk gradually increases in fat as the feeding progresses.

Your breasts don’t “flip a switch” at some arbitrary point and start producing hindmilk instead of foremilk. Instead, think of the beginning of a nursing session as being like turning on a hot water faucet.The first water you get out of the tap isn’t usually hot, but cold. As the water runs, it gradually gets warmer and warmer and warmer. This is what happens with the fat content in mom’s milk – moms’s milk gradually increases in fat content until the end of the feeding.

Since fat content is is directly related to the degree of emptiness of the breast, it is possible, depending upon nursing pattern, for fat content to be higher at the beginning of a particular feeding than it is at the end of some other feeding.

Now think about the hot water faucet again. If there is a long period of time before the faucet is used again, then you go through the “cold to hot” process once more, but if you turn the water on fairly soon after it was used then the water is either pretty warm or still hot, depending upon how long it’s been since the faucet was last on.This is how it works with mother’s milk too – the longer the time between feedings, the lower the fat content at the beginning of the next feeding. If feedings are closer together, you’re starting off with a higher fat content.

As a particular feeding progresses, fat content increases, milk volume and flow decrease, and milk synthesis speeds up. Because every baby varies in the amount of time it takes him to receive his fill of the higher-fat milk at the end of the feeding, it is important not to switch breasts while baby is actively nursing.

How does milk production work? @ KellyMom

Worries About Foremilk and Hindmilk by Nancy Mohrbacher, IBCLC, FILCA

Foremilk and Hindmilk: In Quest of an Elusive Arbitrary Switch by Anne-Marie Ablett

Many thanks to Paula Yount of Mother-2-Mother.com for the great analogy!