Extra nipples or breast tissue is fairly common (1-6% of women) and is a result of incomplete regression of the mammary ridge (milk line) during the development of the embryo before birth. 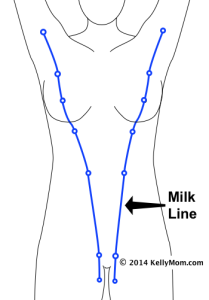 What causes this? Extra breast tissue is a common developmental variation in human anatomy. Breast development begins around week four of gestation, with two parallel lines of glandular tissue called the milk line (or mammary ridge) extending from slightly beyond the underarm area, down the chest and abdomen, to the groin area and ending near the groin at the inner sides of the thighs (see figure).  Breasts eventually develop from these lines of tissue, and the remaining tissue regresses. Occasionally, there is an incomplete regression of the mammary ridge during embryo development, and extra (supernumerary) nipples and/or breast tissue forms, usually along this line but occasionally in other parts of the body. This can occur in both males and females. An extra nipple, areola, and/or glandular tissue may be present anywhere along this line (a nipple without glandular tissue is most common), and it is not at all unusual to have more than one.

What is typical when it comes to extra breast tissue? The term hypermastia (or polymastia, or ectopic breast tissue) refers to the presence of accessory mammary tissue in addition to the two main glands. It can occur in a number of different forms. Some examples include: 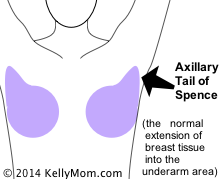 What does it look like? Accessory breast tissue can appear as a complete breast if both a nipple, areola, and glandular tissue are present. If mammary tissue without a nipple or areola is present, it may appear as a lump or swelling under the skin. An accessory nipple may look like a freckle, a mole or a dimple, or it may look like a typical nipple (though it is usually smaller). Often, accessory nipples or breast tissue are not noticed until hormonal changes make them more apparent. Sometimes a new mom will not know she has accessory breast tissue until she notices milk dripping from a “freckle” or pore in the skin.

What happens during pregnancy & lactation? The hormonal changes during pregnancy and lactation can cause accessory breast tissue to increase in size and/or produce milk. You may also experience fluctuating swelling and/or tenderness (this may also occur during adolescence and/or menstruation). Accessory nipples and areolas may darken.  If you experience skin irritation when clothing rubs against an accessory nipple, try covering it with a bandaid or gauze.

As with any breast tissue, accessory breast tissue can become engorged at the beginning of lactation, and may leak milk. Accessory breast tissue does not typically produce much milk, and does not interfere with breastfeeding. The usual methods for easing engorgement can be helpful. If the extra breast tissue is not drained by a ductal system (so that no milk can leak or be expressed), comfort measures such as cold compresses can help until the extra tissue involutes and stops producing milk. Mothers with leaking milk from accessory nipples have found that a breast pad or sometimes just a bandaid can be effective for catching leaks. As with any leaking, applying pressure straight in toward the chest may help stop the leaking.

Uncommon problems: Since this is breast tissue, it has the potential for the same problems as any other breast tissue, including  inflammation, mastitis, abscesses, cysts, benign lumps, or malignant changes. The accessory nipple or breast tissue can be surgically removed, but this is not necessary unless it is causing problems. Some people do have accessory breast tissue or nipples removed for cosmetic reasons.

Excuse Me, But Is That A Third Boob In My Armpit?