Q: Should breastmilk left over from a feeding be dumped immediately (like formula), or can you save it and give it to baby later?

A: It is probably safe to save the left-over milk for use at the next feeding, but no published studies have investigated this issue. As a result of this lack of information, milk storage guidelines recommend that breastmilk be discarded at the end of the feeding. Let’s look at the information that we do have available…

Storage of left-over milk is a different issue than storage of fresh milk because bacteria from baby’s mouth usually enters the milk once baby begins drinking.  Freshly expressed milk contains live cells which kill bacteria, and one study (Pardou et al, 1994) found that some of the milk that had been refrigerated for 8 days actually had lower bacteria levels than when the milk was first expressed.  Many mothers of healthy babies have saved left-over milk for longer than two hours (sometimes as long as 24-48 hours) with no problems, but whether or not the milk is safe depends on several factors. 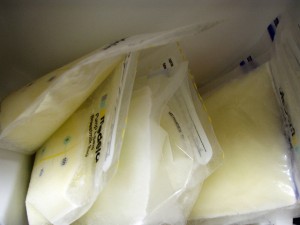 If you do save the milk for later use, some mothers re-refrigerate the milk and others leave it at room temperature – no studies have been done, so we don’t know whether one method is preferred. We do know that for any food, refrigeration slows bacteria growth. Milk storage guidelines do not include any warnings against rewarming milk, and many moms rewarm with no issues. Many moms smell (or taste) the milk to make sure it still smells fresh.

Following are some quotes from various breastfeeding experts:

From the Academy of Breastfeeding Medicine’s Clinical Protocol #8: Human Milk Storage Information for Home Use for Full-Term Infants (March 2010):

“Once a baby begins drinking expressed human milk, some bacterial contamination occurs in the milk from the baby’s mouth. The duration of time the milk can be kept at room temperature once the baby has partially fed from the cup or bottle would theoretically depend on the initial bacterial load in the milk, how long the milk has been thawed, and the ambient temperature. There have been no studies done to provide recommendations in this regard. Based on related evidence thus far, it seems reasonable to discard the remaining milk within 1–2 hours after the baby is finished feeding.”

“Mothers are often told to discard any milk after a feeding because the milk mixes with the baby’s saliva. Although no published studies have examined the safety of keeping leftover milk, a college student researched this scenario for her unpublished senior thesis (Brusseau, 1998)… The only milk with increased total bacterial counts was one batch of the warmed and fed milk from a mother who had not followed instructions and had donated previously frozen milk instead of fresh milk. All other batches showed no change in total bacterial counts within 48 hours after feeding.”

If my baby doesn’t finish a bottle of pumped breast milk can I save it for later? by Jan Barger, R.N., M.A., IBCLC:

“…Based on this study, which admittedly needs to be done on a larger scale, it would seem to me that expressed breast milk, fed to the baby, partially consumed, and then refrigerated, could be used for one more feeding no more than four hours later. That’s probably fairly conservative. One of the best tests of whether the milk is spoiled is to do what you do with cow’s milk: Smell it and taste it!”

“Summary: The number of infants who are breastfed is on the rise, as is the number of women in the workforce. Many women who choose breastfeeding after returning to work, express milk during the day and store this milk for a future feeding. When infants do not finish a bottle of expressed breastmilk, doctors recommend unfinished portions be thrown away. This study examined bacterial levels in expressed, partially consumed breastmilk that was stored for 48 hours at 4-6° C. A portion of unconsumed milk was examined as a control. Samples were taken every 12 hours for bacterial analysis. Tests were performed to identify total colony counts, pathogenic Staphylococci, coliforms and b-hemolytic Streptococci. This study showed no significant difference between bottles that were partially consumed and those that were not exposed to the baby’s mouth for 5 out of 6 participants. All milk samples had colony counts in the acceptable range of < 105 colony forming units per milliliter (CFU/ml). Although this project provides evidence that it may be safe to refeed a child a bottle of breastmilk, due to the small sample size, further tests should be performed.”

“With exception of participant F there was no change in total bacteria found in expressed human milk that has been partially fed to an infant… Since participants E-F were showing a significantly higher amount of growth than participants A-C I examined the questionnaire to see if I could find any common factors among each group. Due to small sample size it was not possible to statistically analyze the information, but I could not find anything outstanding that participants A-C did differently from participants E-F… Although I clearly specified that freshly expressed refrigerated milk was to be provided for the study, participant F’s milk was frozen… The most important lesson we can learn from this data is that in spite of high bacterial levels found both control and partially consumed milk, none of the babies became ill. This provides some evidence that different standards need to be made for healthy full-term infants.”

More on Breastmilk Storage and Handling