There’s been a lot of discussion about paid maternity leave in the US.
According to Save the Children’s 2012 State of the World’s Mothers Report: 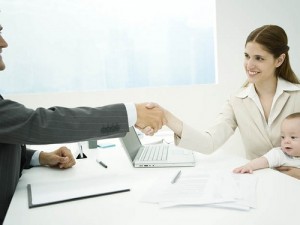 “Perhaps the most effective way to improve breastfeeding rates is to provide longer periods of paid maternity leave. Countries with generous maternity and parental leave policies – such as Denmark, Norway and Sweden – tend to have high breastfeeding rates… Apart from the United States, all developed countries now have laws mandating some form of paid compensation for women after giving birth.”

As part of having an informed discussion, an idea of the costs should be included since part of implementing universal maternity leave includes collecting the money. I tried to find an estimate of the cost online, and was unsuccessful. Therefore, I’m putting together my own estimate. This is not to advocate for or against the proposal, but it seems worthwhile to add the cost and method of funding to the discussion.

To get a rough cost, let’s make some assumptions about the program. I’m not suggesting that this is the way that universal maternity leave should be handled – this is just meant to keep the calculations very simple (look at the end of this article to see some different options).  If someone has a more in-depth estimate, let me know about it! 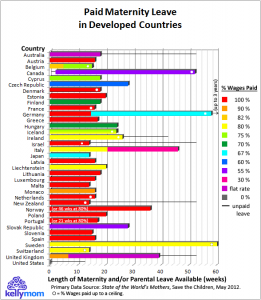 Some of the Unknowns:

Continuing to keep it simple, we’ll assume that the unknown costs and savings cancel each other out.

Let’s run some numbers (all for the United States):

Using the latest data available from the US government…

If new mothers are paid 75% of median income, that is $26,091 paid maternity leave per year per birth.

If we assume, similar to Social Security, administrative costs are minimal (less than 1%), we can say $113 billion per year is the rough cost of this program.

Now let’s figure out what that number means in relation to the workforce.

There are about 142 million people employed in the US.
Source: Bureau of Labor and Statistics.  http://www.bls.gov/news.release/pdf/empsit.pdf.

If we treat paid maternity leave similar to unemployment insurance and social security, then, based on our simplified estimate,  $796 per worker per year (or $66 per month) will pay for it.

Don’t like the assumptions above? Using the same data, if we pay all new mothers 50% of the median income for women for 6 months, our simplified estimate gives a cost of $267 per worker per year (or $22 per month).

If we include only the employed mothers (55.8% of mothers with babies under a year old are in the workforce – Source: Bureau of Labor and Statistics) and again give them 50% of the median income for women for 6 months, our simplified estimate gives us a cost of $149 per worker per year (or $12 per month).

So here are the questions:

Is this something that should be done?
If so, is a payroll tax or fee (similar to Social Security or Unemployment) the way to fund it?

For commenters: Keep the discussion civil, remember your manners, and stay on topic! If you’re unsure of the house rules, the Commenting Guidelines are here.