9. How did you feel about the way extended breastfeeding was portrayed on the cover of TIME? 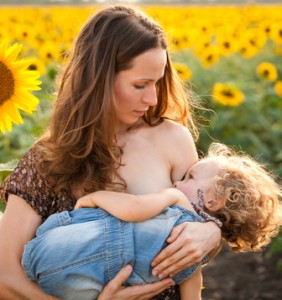 Jessica ____________________
It didn’t portray breastfeeding the way it naturally occurs – in a nurturing, snuggly way. Though, I certainly have seen older kids standing up nursing while their moms are busy talking to me or others around her. As far as how it was publicly portrayed before – was it?!

One of the producers at ABC’s Nightline said to me during my interview, “I don’t think the uproar would have happened if the mom had been breastfeeding a six month old.” My response: “Maybe. But I can’t recall ever seeing a mom nursing a child of ANY age on the cover of a national magazine.” We see breasts on lots of other magazine covers, mainly to sell products. We never get to see breasts as what they are – mammary glands that nourish our babies.

Jamie ____________________
Awkward is the only term that really expresses that picture for me. I was there, so I know what they were going for (confidence and contentment), and it was not conveyed in that picture. I am not thrilled with the shot of me, but my biggest problem is with my son and his body language in the photo. I see his expression and arm placement as completely disconnected, which made the photo a poor representation of what breastfeeding really is past infancy (connectedness, comfort, and love…not to mention the antibodies and nutrients they are getting in the breast milk).

I have no problem nursing standing up (we have definitely done it at home…in fact, we did it today!) – I thought that standing would help show how infant breastfeeding is different than toddler breastfeeding (the majority of people seem not to understand that). What they were looking for is playfulness, confidence, contentment, and always nurturing in the pose. Do you see that in this photo? I don’t. They definitely have those shots and I feel they lost an opportunity to educate by choosing an outtake rather than one of the pictures we worked so hard to get.

Melinda ____________________
I personally would have chosen a different headline and picture to represent extended breastfeeding because of what it means to me, but no matter how loving you make it those who disagree will disagree.

Dionna ____________________
During the photo shoot, Martin Schoeller (the photographer for TIME) asked us to look confident, assured. The photos he had up as inspiration were all very maternal in appearance. I do feel that Jamie looked confident and assured in her picture, but the pose was not one that I felt anyone looked for during the entire shoot.

Regardless of the pose itself, I am glad that breastfeeding an older child was shown on the cover. Breastfeeding past infancy is normal, natural, and healthy, whether your child is three weeks old or three years old.