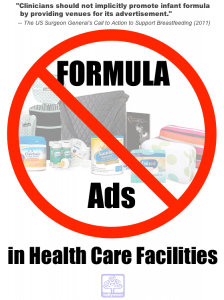 There are a number of common objections I hear from parents about the campaign to keep infant formula marketing out of health care facilities.

Is this campaign is intended to make parents who use formula feel guilty? No!

This message is directed at the infant formula manufacturers and the thousands of health care facilities that give these manufacturers free access to mothers:

Health care providers need to stop broadcasting a mixed message– “Breast is best, but here’s some formula because we don’t expect it to work for you.”

“Two-thirds of mothers who intend to exclusively breastfeed are not meeting their intended duration.”

Health care facilities should provide commercial-free information and support to mothers who need or choose to use formula. Instead of advertising hype, parents who use formula deserve to have unbiased information from their health care providers.

Formula is expensive, and one of the things driving this high cost is the huge amount of money spent on free samples/advertising in health care facilities and advertising to health care providers (including free products, meals, seminars, and more). From a quick online price check at a discount store (comparing only powdered formulas), the brand name formulas are 1.5 to 2 times the cost of a generic formula. Ready-to-feed formulations are even more expensive. The nutritional ingredients are the same.

Formula manufacturers know that the brand of formula mothers are given in the hospital is the one they are most likely to continue to use through the first year or longer.

“Almost all mothers doing any amount of bottle-feeding at the time of their interview were using the same formula brand and a ready-to-feed preparation used during their hospital stay.”

Parents who buy infant formula and stick with the brand the hospital distributed are paying tons of money for those “free” samples —  $700+ per year over the cost of generic formula. The reason the formula companies include all these freebies in their advertising budgets is because it generates huge profits! You can buy a really fancy diaper bag for the amount of money it costs parents who are buying the formula, plus you wouldn’t be advertising a formula company wherever you go.

Removing formula gift bags from health care facilities will not take formula from the mouths of hungry babies. Formula will still be available in the hospital, and it is widely available in practically every grocery store, pharmacy,  discount superstore, baby store, and more. In the US, there are also many resources (including WIC) for those parents who have problems affording formula.

You may think that mothers would not be influenced by advertising, but randomized controlled trials tell us otherwise. Mothers who receive formula gift bags are more likely to supplement with formula and are more likely to discontinue breastfeeding earlier– even when the formula is removed from the bag before the bag is given to mom. The formula manufacturers know how useful it is (to their profits) to ensure that formula goes home from the hospital with breastfeeding mothers. Many a brand-new breastfeeding mother has reached straight for the formula instead of reaching out for breastfeeding help when her newborn is fussy, and/or others around her are suggesting that her milk is just not adequate. And why not? After all, “the doctor gave it to me, so it must be just as good or better than breastmilk…”

Health authorities in the US agree that infant formula marketing does not belong in health care facilities… so why is it still there?

“Distribution of discharge packs contributes to premature breastfeeding discontinuation. The ACOG [American Congress of Obstetricians and Gynecologists], AAP [American Academy of Pediatrics], American Public Health Association (APHA), and the federal Government Accountability Oﬃce (GAO) all identify this practice as inappropriate in medical environments and recommend against it. “

“Be it resolved, that the Academy advise pediatricians not to provide formula company gift bags, coupons, and industry-authored handouts to the parents of newborns and infants in office and clinic settings.”

The distribution of materials such as free samples, pamphlets, notepads, growth charts, or gifts that bear logos from companies marketing infant formula implicitly endorses formula feeding. Displays of posters, products, or decorations from these companies in a health care professional’s office or in a hospital or clinic leave the impression that clinicians favor formula feeding over breastfeeding. Given the health consequences of not breastfeeding, clinicians should not implicitly promote infant formula by providing venues for its advertisement.

— U.S. Department of Health and Human Services, The Surgeon General’s Call to Action to Support Breastfeeding (2011)

We Support Formula-Feeding Moms AND We Fight Formula Marketing from BestforBabes.org

The WHO Code, marketing, sponsorship, and why you should give a damn from theBoobGeek.com

Forget the WHO Code. It’s the Street Code that Undermines Mothers in Detroit by Kimberly Seals Allers

Day of Action: get out from under the influence of a lifetime of formula marketing from the Academy of Breastfeeding Medicine

Mama Bear doesn’t go away when the kids are grown: Day of Action #NoFormulaAds by Jodine Chase

On the Trail of Code Compliancy @KellyMom

Keeping up with which companies are meeting their obligations under the International Code of Marketing of Breastmilk Substitutes (the Code) can be a daunting task.

Moving formula marketing out of hospitals requires a culture change. Many doctors and nurses enjoy giving patients a “free gift,” and don’t appreciate the hidden costs associated with marketing strategies…

How to report unethical promotion of formula, bottles and other breastmilk substitutes from phdinparenting.com

The continued marketing of formula, bottles, pacifiers, or complimentary foods for babies under six months of age is dangerous and unethical…