Breastfeeding rates in the United States and worldwide

What percentage of moms breastfeed their babies? How long do they breastfeed? These questions have interested me, and prompted me to look for research that has been done. I’m posting the results of my efforts here, for the benefit of anyone else who might be interested.

Global Data Base on Breastfeeding from World Health Organization/UNICEF

State of the World’s Children: Nutrition from World Health Organization/UNICEF. The nutrition tables include breastfeeding data.

Breastfeeding Statistics, September 15, 2003, compiled by Carol Huotari IBCLC for the LLLI Center for Breastfeeding Information, includes breastfeeding initiation rates and percentages of mothers breastfeeding 4-6 month old babies in many countries around the world.

US Centers for Disease Control

The US Centers for Disease Control collects statistics on breastfeeding rates in the United States. Following are some useful links to their information: 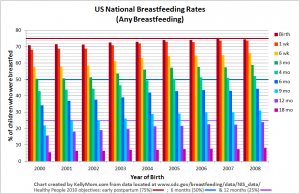 US National Breastfeeding Rates. This shows the percentage of babies who received any breastmilk at all (at the breast or via alternative methods). 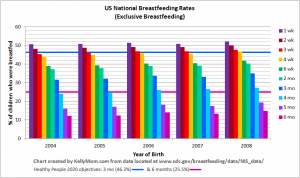 US National Exclusive Breastfeeding Rates. Exclusive breastfeeding, as defined in this CDC survey, means that baby receives nothing but breastmilk (at the breast or via other feeding methods).

Until relatively recently, ironically enough, the primary source for statistical information on breastfeeding rates for the United States was Ross Labs (Ross Products Division, Abbott Laboratories), one of the major infant formula manufacturers. This used to be essentially the only source for breastfeeding statistics. Ross only collects information for babies up to 12 months old, since that is their primary sales market.

Breastfeeding after 12 months in the United States

Growing Up In Australia: The Longitudinal Study of Australian Children, Annual Report 2006-07

Towards a national system for monitoring breastfeeding in Australia: recommendations for population indicators, definitions and next steps from the Australian Food and Nutrition Monitoring Unit (2001)

A search of Lactnet (site no longer exists) resulted in some 1995 Australian statistics (source: extracted from a report from the Australian Bureau of Statistics “Australian Social Trends 1997”. This includes some “unpublished” breastfeeding data from the major 1995 National Health Survey in Australia.):

Breast-feeding, children born 2000 from the Centre for Epidemiology at the National Board of Health and Welfare, Official Statistics of Sweden (Amning av barn födda 2000, HÄLSA OCH SJUKDOMAR 2002:7). Includes a summary in English, and tables have both Swedish and English text.

Other sources of information

Breastfeeding Patterns in the Developing World (1999) from MeasureCommunication.org

Parenting magazine had some information on breastfeeding rates around the world in their April 1997 issue. Their article (p. 34) was entitled “Breastfeeding by the Numbers.” The information below is from this article.

The World Health Organization and UNICEF have recommended for a decade that mothers breastfeed for at least two years. But most US women who nurse stop before their baby is six months old – and many never start at all. How do other countries stack up?