Our sponsor for the month is Freemie. Learn more about Freemie’s products here.

Can Moms Get More Sleep By Freemie Feeding? 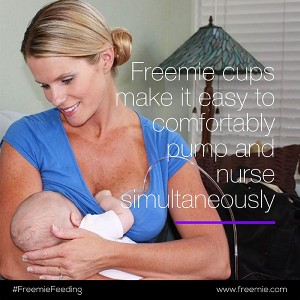 Freemie Feeding is a potentially time-saving technique that combines pumping one breast with a Freemie cup and nursing baby on the other breast simultaneously. For many moms, Freemie Feeding is one of the most compelling reasons to have Freemie cups in their breastfeeding toolkit.

Because there is no bottle protruding from mom’s chest while Freemie Feeding, the baby can be comfortably held around the softly curved shape of the Freemie cup and nursed, with less distractions from feeding. If this technique can be successfully employed just twice a day – for example, when first waking in the morning and at bedtime – the time saved by combining pumping and feeding might mean as much as an extra hour of sleep to mom on some days. When mom has a new baby in the house, that extra sleep is priceless! 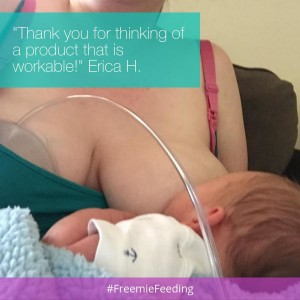 The patented rounded and more natural shape of the Freemie milk collection cup makes it the ultimate tool for women who want to pump and nurse simultaneously. Though many women report to us that they may be able to pump and nurse very young newborns with the traditional bottles and horns, they also tell us that as babies get older the sharp and bulky shapes of those horns and bottles, with tubes conspicuously poking out, become a big distraction. Babies stop feeding and start playing, making the attempt counter-productive. 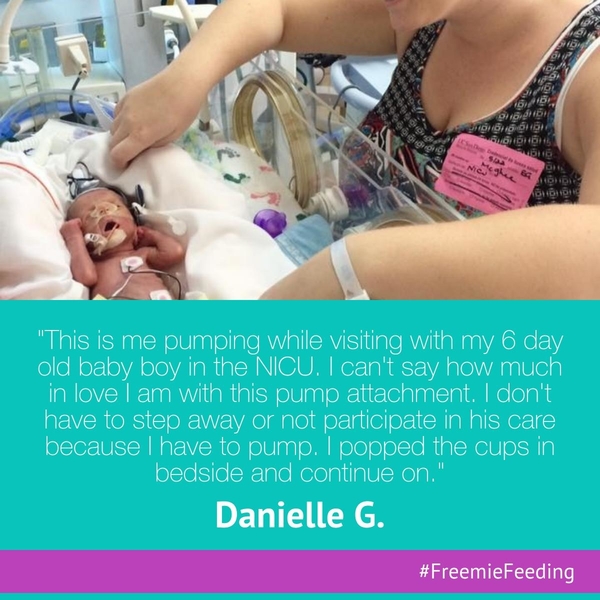 Many NICU moms already realize that Freemie cups are great for use at the hospital. Moms can pump discreetly with Freemie cups at their babies’ bedside in a busy NICU full of other families and hospital staff, while touching or holding their babies. In most cases they can even hold their babies for some precious skin-to- skin time while pumping.

NICU moms may also be hospitalized themselves, sick or recovering from a major surgery. They are often in pain, exhausted and stressed. For these moms, clutching onto traditional horns and bottles and pumping eight to ten times each day to initiate milk production is an overwhelming challenge. Many fail to get their milk in. The hands free Freemie cups can make a tremendous difference in these situations, allowing mothers to pump, even when sick or exhausted.

But beyond the most basic struggle to pump with the hand held horns and bottles, we believe the Freemie Feeding technique will one day be a widespread practice in NICU’s around the world as babies gain strength and are getting ready to go home. Many NICU moms whose babies are approaching discharge have become pump-dependent, and their babies are accustomed to bottle feeding. These moms may be in despair, worried they will not be able to breastfeed, and will be stuck with exclusive pumping.

The challenge many of these moms face is that babies that have become accustomed to bottle feeding can be too impatient or frail to nurse. For these babies, it just takes too long to get the food to come out. They have gotten used to immediate results when they suck on the bottle. But by using a pump and one Freemie cup to stimulate a letdown of milk from one breast, for many women milk will also begin to leak from the other breast. If this pumping technique is used while cuddling baby in a nursing position at that breast, babies that have become accustomed to bottles may begin to learn where the food comes from, without having to expend too many precious calories or tiring before they get it. And as they begin to enjoy the feeding and bonding time with mom, it is our hope that moms can achieve an easier balance in their lives, with more breastfeeding and less pumping, so they can sustain breastfeeding longer.

Most women give up breastfeeding early because pumping is so much work. Even though Freemie cups make pumping much easier than any other pumping system, pumping is still more work than breastfeeding. If we reduce the amount of work necessary to keep going, we are certain more women will breastfeed longer.

Please Note: Use of the Freemie system with a hospitalized or otherwise compromised infant must be done under the supervision of a lactation or health care professional.

The Freemie cups were born in a neonatal intensive care unit in northern California, because my wife, a physician, was acutely focused on the potentially life-saving importance of her milk to our twins, who were nine weeks premature, and just over 3 pounds each. Stella struggled to train the babies to breastfeed after we brought them home, and spent more than a year dependent on the pump.

Earlier this year I had the opportunity to visit the Women and Children’s Hospital of Da Nang, which is the NICU for a large area of central Viet Nam. The hospital is in the process of starting the first human milk bank in that country. I was in Da Nang to facilitate a sizeable donation of Freemie cups and our Equality manual pumps to the hospital. (Our Freemie Equality pump is the world’s only concealable breast pump that does not require electricity, and is especially useful where electricity may not always be available.) The donation to the hospital was coordinated by Alive & Thrive, a global nonprofit funded by the Bill and Melinda Gates Foundation. It was a humbling experience to see such tiny and vulnerable infants in that NICU, half a world away, to know that we will be helping them, and to know that they are just the first of millions more in the developing world that we will help. 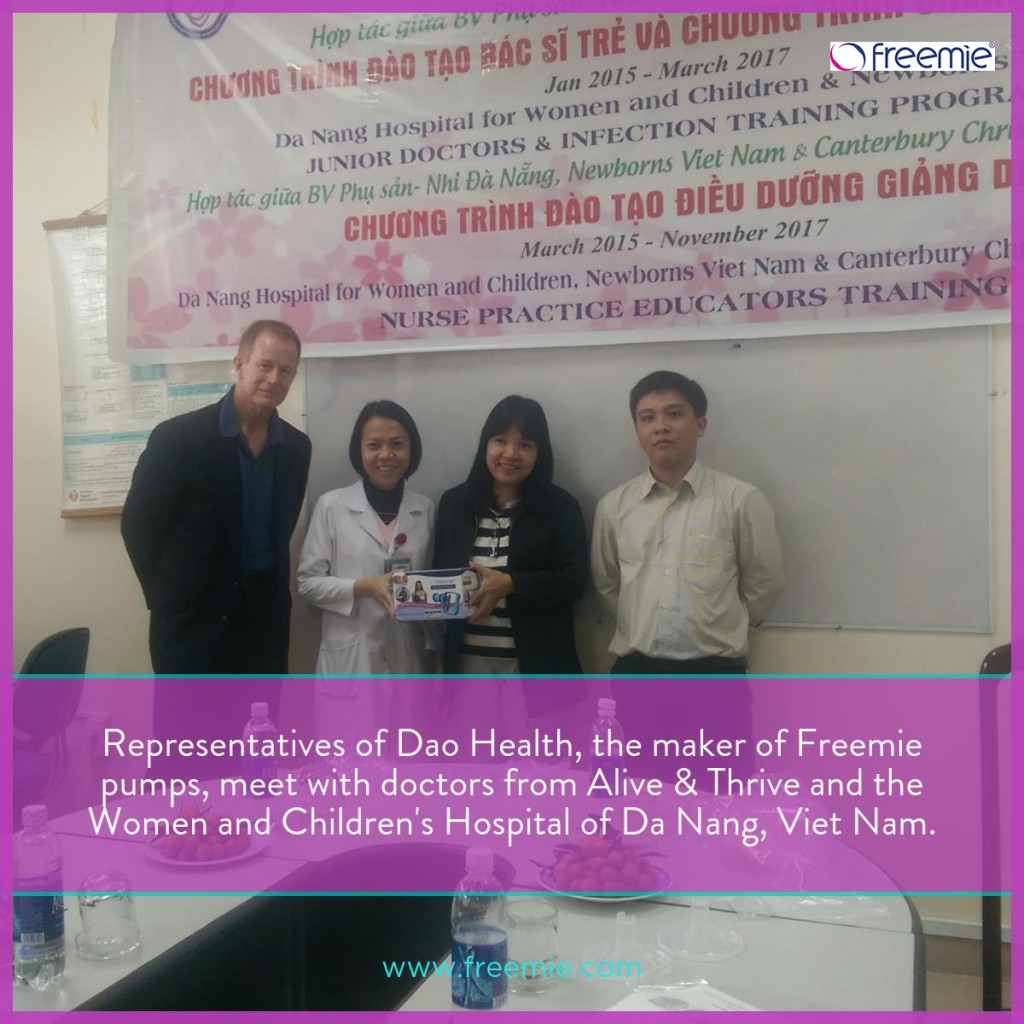 If you are a mom already using the Freemie Feeding technique and would like to provide us a photo or video so that we can share it and help other moms, please email us at media@freemie.com.

How can the Freemie system improve your pumping routine?

About Freemie: The Freemie system was created by my wife, Dr. Stella Dao and myself, after the premature birth of our twins. Dr. Dao is board certified in Emergency Medicine and practices in Northern California. Our twins, at just over three pounds each and in the NICU for six weeks, were too weak to nurse, so Stella was pump dependent. Her workplace and our family situation made clear that the tools needed to sustain breastfeeding in the modern world did not yet exist.

We founded DAO Health with the goal to transform the global infant feeding culture, by altering the economics of breast milk production. We believe that families everywhere need tools adapted to the modern economy to help them to feed their babies a healthier diet. Producing breast milk while separated from baby, for working women, is a lot of extra work – and time is money. We believe we can increase breastfeeding rates by reducing the actual cost to produce breast milk – when accounting for moms’ time – below the cost of formula. We can do this by providing moms with the necessary tools to produce milk efficiently.

We launched our Freemie family of products in late 2013 in the United States. Now, Freemie cups are already available in more than a dozen countries, and we’re picking up speed! If you care to learn more about our journey to bring this solution to you, click here.

Freemie is not responsible for and has had no influence over the creation, selection or presentation of evidence-based or other information or resources provided on this site.