Babies should be fed when they indicate hunger. Crying is a late indicator of hunger – breastfeeding is much easier for both mom and baby if mom is able to pick up on baby’s earlier hunger cues. 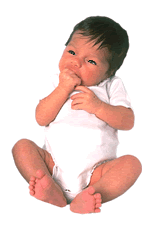 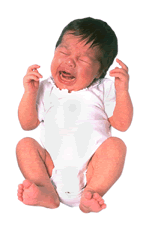 “My newborn wants to sleep all the time! Should I wake him to nurse?”

Yes, if he doesn’t wake on his own. Many newborns are very sleepy in the early days or weeks and may not exhibit hunger cues as often as they actually need to eat. Newborns should be nursed anytime they cue hunger, but at least every 2 hours during the day and at least once during the night. Once your baby has established a good weight gain pattern (at least 4 ounces per week, for babies under 4 months), you can stop waking baby to nurse and let him set his own pattern.

“My baby just started sleeping longer at night. Do I need to wake him to nurse?”

“My baby frequently sucks on his hands. Does this always mean that he’s hungry?”

After the newborn period, hand sucking is not as reliable an indicator of hunger. Starting at around 6-8 weeks, baby will begin to gain more control over his hands and will soon begin to explore his hands and everything else using his mouth. It is also common for babies to suck on their hands when their gums become tender in preparation for tooth eruption. Symptoms of teething can sometimes occur weeks and even months before the first tooth erupts. More here on teething.

Signs That Your Baby Is Hungry, a video from baby gooroo’s Amy Spangler, RN, MN, IBCLC

The Clock and Early Breastfeeding, by Nancy Mohrbacher, IBCLC, FILCA

Nursing your newborn — what to expect in the early weeks @ KellyMom

Should baby be on a schedule? Links @ KellyMom