In general, you should simply listen to your body and eat to appetite – this is usually all you need to do to get the calories you need. When exclusively nursing a young baby, it is very common to feel hungry much of the time… listen to your body. Mothers of older babies may feel hungrier when baby temporarily increases his or her milk intake (for example, during a growth spurt)… again, listen to your body. Counting calories is rarely necessary unless you are having problems maintaining a healthy weight.

If you really want (or need) to count calories…

Studies have shown that most healthy breastfeeding women maintain an abundant milk supply while taking in 1800-2200 (or more) calories per day. Consuming less than 1500-1800 calories per day (most women should stay at the high end of this range) may put your milk supply at risk, as may a sudden drop in caloric intake. (See Can I diet while breastfeeding? for more information on calorie restriction).

A mother’s “baseline” need for calories (not including lactation) depends upon her activity level, weight and nutritional status. A mother who is less active, has more fat stores, and/or eats foods higher in nutritional value may need fewer calories than a mom who is more active, has fewer fat stores, and/or eats more processed foods. This link from the Children’s Nutrition Research Center at Baylor College of Medicine has more information (including a handy calculator) on determining your individual caloric needs: Research helps fine-tune a woman’s true caloric needs. 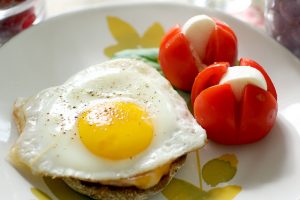 An exclusively breastfeeding mother, on average, needs to take in 300-500 calories per day above what was needed to maintain pre-pregnancy weight. Since the recommended added calories during the last two trimesters of pregnancy is 300 calories/day, an exclusively breastfeeding mother will typically need either the same amount of calories she was getting at the end of pregnancy, or up to 200 additional calories per day. That’s the equivalent of adding 1-2 healthy snacks per day.

Per Breastfeeding and Human Lactation (Riordan, 2004, p. 438), “The amount of energy needed by lactating mothers continues to be debated. The lactating mother need not maintain a markedly higher caloric intake than that maintained prior to pregnancy: in most cases, 400-500 calories in excess of that which is needed to maintain the mother’s body weight is sufficient.”

The number of additional calories needed for nursing depends on:

The Institute of Medicine notes that the median amount of fluids typically consumed by breastfeeding mothers is 3.1 liters (13 cups), compared to 2.2 liters/9 cups for non-pregnant/lactating women and 2.3 liters/10 cups for pregnant women. This is not necessarily the exact amount of water you yourself will need – the IOM points out, “Given the extreme variability in water needs that are not solely based on differences in metabolism, but also in environmental conditions and activity, there is not a single level of water intake that would ensure adequate hydration and optimal health for half of all apparently healthy persons in all environmental conditions… the AI [Adequate Intake] does not represent a requirement; it is an amount that should meet the needs of almost everyone in the specific life stage group under the conditions described.” 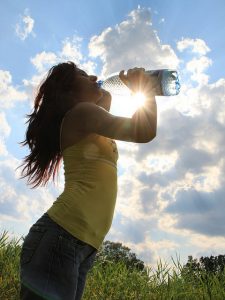 It is not necessary to force fluids; drinking to satisfy thirst is sufficient for most mothers to stay hydrated. Pay attention to your body’s signals – busy mothers often ignore thirst if there is nothing nearby to drink – try to keep a drink near where you usually breastfeed baby or at your desk at work. Pumping moms may find that they need to pay more attention to remembering to stay hydrated. Signs that you are not getting enough fluids include concentrated urine (darker, stronger smelling than usual) and constipation (hard, dry stools).

Unless you are severely dehydrated, drinking extra fluids (beyond thirst) is not beneficial, may cause discomfort, and does not increase milk supply. Nancy Mohrbacher’s Breastfeeding Made Simple (2010) notes, “Contrary to popular belief, drinking more fluids is not associated with greater milk production.” In Nutrition During Lactation, the IOM summarizes: “It is widely assumed that milk production requires a high fluid intake on the part of the mother, yet the evidence suggests that lactating women can tolerate a considerable amount of water restriction and that supplemental fluids have little effect on milk volume… thirst may sometimes function too slowly to prevention dehydration among women with high fluid losses resulting from exercise or high ambient temperature (experienced by many women without air conditioning in the summer). Thus, careful attention to adequacy of fluid intake is warranted in such situations, but under most conditions there appears to be no justification for emphasizing high fluid intake as a way to improve milk production.” [See the references below for more information.]

For mothers who are engorged, attempting to reduce breastmilk oversupply, or weaning – research has shown that decreasing fluids does not reduce engorgement or suppress milk supply.

Breastfeeding mothers are sometimes warned that “Only water counts!” when it comes to fluid intake, but this simply doesn’t make sense – your body can utilize water from many sources, including vegetables, fruit, soup, water, fruit & vegetable juices, milk, tea and other beverages. The foods that you eat accounts for about one-fifth of total fluid intake (IOM, 2004). Some fluids are certainly more nutritious than others, but even soda will provide fluids you need (although it may also provide sugars, caffeine*, etc. that you do not need).

Nutrition for mom while nursing during pregnancy or tandem nursing

Can I continue to breastfeed if I work out/exercise?

Can I diet while breastfeeding?

Research helps fine-tune a woman’s true caloric needs, from the Children’s Nutrition Research Center at Baylor College of Medicine, has more information (including a handy calculator) on determining your individual caloric needs

Illingworth RS, Kilpatrick B. Lactation and fluid intake. Lancet. 1953;2:1175. Lawrence (2005 ed, p. 326) summarized this study of 210 postpartum moms, in which half drank to thirst (averaging 69 oz daily) and the other half were forced to take 6 pints (averaging 107 oz) daily. Per Lawrence, “The mothers who were forced to drink beyond thirst produced less milk, and their babies gained less well.”

Olsen A. Nursing under conditions of thirst or excessive ingestion of fluids. Acta Obstet Gynaecol Scand. 1940;20:313. “Forced, excessive drinking is therefore neither necessary nor beneficial as far as the nursing is concerned and may even be harmful” (quoted in Lawrence, 2005 ed, p. 326).