When can I begin using a pacifier?

It is recommended that pacifiers and other types of artificial nipples be avoided for at least the first 3-4 weeks. I’d personally suggest that most breastfed babies – if they get a pacifier at all – would be better off without a pacifier until mom’s milk supply is well established (6-8 weeks, usually) and the 6 week growth spurt is over. That way you’ve established a good milk supply and don’t lose any much-needed breast stimulation to a pacifier. 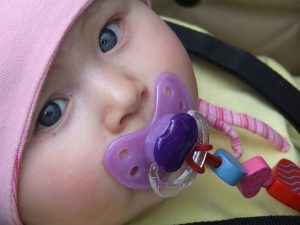 What should I consider before using a pacifier?

After the early weeks, pacifier use is less likely to cause problems as long as you are aware of the following:

When to avoid the pacifier

If you observe any of the following problems, it would be a good idea to discontinue pacifier use, at least until the problem is resolved:

Have you heard that pacifier use might help to prevent SIDS? Here’s what the American Academy of Pediatrics Section on Breastfeeding says about this in their February 2012 Policy Statement:

Given the documentation that early use of pacifiers may be associated with less successful breastfeeding, pacifier use in the neonatal period should be limited to specific medical situations. These include uses for pain relief, as a calming agent, or as part of structured program for enhancing oral motor function. Because pacifier use has been associated with a reduction in SIDS incidence, mothers of healthy term infants should be instructed to use pacifiers at infant nap or sleep time after breastfeeding is well established, at approximately 3 to 4 weeks of age.

As long as you keep the above in mind and only use a pacifier sparingly, it is up to you whether and when you wish to comfort baby yourself or with a pacifier. However, keep in mind that there is no scientific evidence that suggests that babies have a need to suck independant of the need for food. When a baby is indicating a sucking need, it’s generally best that baby be encouraged to breastfeed, especially if there is a weight gain concern. The breast was the first pacifier and in most cases remains the best.

Is your baby nursing all the time? @

Pacifiers: In or Out? and Giving a pacifier to a breastfed baby by Dr. William and Martha Sears

Top Ten Reasons for NOT Using a Pacifier by Linda J. Smith, IBCLC

Perils of the Pacifier by Bruce A. Epstein, MD

AAP Guide to Thumb Sucking and Pacifiers (including safety guidelines)

The Truth About “Nipple Confusion” by Paula Yount

Introducing Bottles and Pacifiers to a Breastfed Baby by Anne Smith

The Pitfalls of Supplementing a Breastfed Baby by Cheryl Taylor White

Nursing Through Confusion by Olga April (a mom’s story)

Some Journal Articles on Pacifier Use and Breastfeeding

AM Vogel, BL Hutchison and EA Mitchell. The impact of pacifier use on breastfeeding: A prospective cohort study. J Paediatr Child Health 2001;Feb;37(1):58-63.

Righard L. Are breastfeeding problems related to incorrect breastfeeding technique and the use of pacifiers and bottles? Birth 1998 Mar;25(1):40-4.

Some Journal Articles on Pacifier Use in General

Larsson E. Sucking, chewing, and feeding habits and the development of crossbite: a longitudinal study of girls from birth to 3 years of age. Angle Orthod. 2001 Apr;71(2):116-9.

Marjo Niemelä, Outi Pihakari, Tytti Pokka, Marja Uhari, and Matti Uhari. Pacifier as a Risk Factor for Acute Otitis Media: A Randomized, Controlled Trial of Parental Counseling. Pediatrics 2000;106: 483-488. A Finnish study on pacifiers has found that reduced pacifier use in children can decrease the incidence of acute otitis media, or ear infections. The study, published in the September issue of Pediatrics, the journal of the American Academy of Pediatrics, followed two groups of children under 18 months. In one group, pacifier use was decreased by 21 percent, while children in the second group used pacifiers continuously. The first group had a 29 percent lower incidence of acute otitis media than the second. Researchers concluded that restricting pacifier use to when a child is falling asleep could prevent such infections.