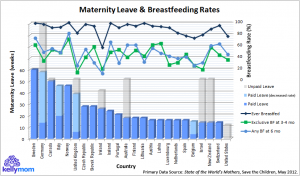 Universal paid maternity leave in the US: What would it cost?

A comparison of breastfeeding rates by country

Pomerleau J. Promotion of Breastfeeding in Countries Wishing to Join the European Union: Analysis of national activities for the promotion of breastfeeding. Nutrition and Food Security Programme, WHO Regional Office for Europe. Updated 2004.